Humility in the Face of Over-Whelming Intelligence

Now that I have your attention, let’s talk about algebra. Algebra is in fact not a mathematical art-form, but rather a type of North African lingerie... Which is a bit like saying that unisex is what students do at the end of a heavy night on the tiles, or that Cornwall is a type of barrier made from foot bacteria.

It has been a strange morning.

I awoke to a bedroom filled with spiders, and a request from the landlord to take down the gazebo at the front of the house.  Which I dutifully did, and was rewarded with discovering that the nest of the mother spider was quietly secreted within the frame of said gazebo. Such an ironic turn of events, it was only fitting that I was overcome by clemency and resolved to relocate mother and egg-babies to a new – and far superior – home in an oak tree on the other side of the river.

Happy with my accomplishments, I decided to leave the house to go visit David ‘The Vagabond’ Lancaster, during which I planned to have coffee and discuss the finer points of bagpipe use in rock bands. It was in this odd frame of mind that I added further peculiarity to the situation by pulling on an over-sized Liverpool football shirt, ripped tracksuit bottoms, and a pair of muck-encrusted trainers, just to see if I could convince people that I was a professional athlete.

Sportified, I set off in search of a chilled-latte (now there’s a contradiction) and a social engagement with a man fascinated by heraldry, only for this aspirant athlete to attract jeers of superiority from the local Tottenham Hotspur fans. Ah yes, I had forgotten that Spurs had stolen Clint Dempsey from under our noses at the tail-end of last night’s transfer window. How I hadn’t predicted this turn of events is beyond me, as rural Hertfordshire is crawling with Lilywhites.

Dave had requested I bring along the fabled flatcap, but not for me to wear. You see, Esteemed Gentleman Lancaster has a habit of commandeering it for his ‘country landowner’ look, and when we go a-strolling in the great outdoors he will invariably bring along a manservant to shoot just to ensure that everyone knows where they stand. How far I can go with this somewhat fictionalised cartoon of young Dave is probably something I shouldn't discover when writing for a public forum.

So we got our coffee, found a suitable hollow in which to drink it – the coffee that is, not the hollow  – and thoroughly deliberated the merits of bagrock. We also discussed a lot of other maddog shite and gibberish, but recreating it here would only serve to further confuse an already cracked posting. 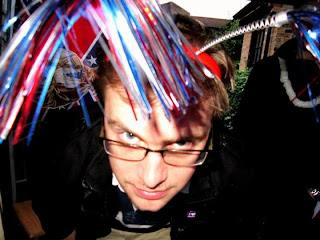