What Would Jason Bourne Do? One Man’s Workout in Amsterdam

I knew only one thing of Amsterdam before I arrived, and that was if my feet were wet then I was in the canal.

Otherwise I was cast hopelessly and perilously adrift in the Dutch capital with little plan of what to do until I flew back to London in 36 hours. The whole thing was an accident, having taken the wrong train in Hamburg when on a work assignment. It was only upon some desperate enquiring in Bremen that I discovered the only way to get home would be by flying from Charleroi, Belgium two days later.

So it came to pass that it was on a rainy afternoon in November that I first discovered the mystifying city that is Amsterdam. It was a clueless existence from the beginning, my confounded uselessness further compounded by getting lost, yet again. I wandered around in the damp unable to find my hotel, burdened throughout by a bag of considerable weight. I finally resorted to getting a taxi to a hotel that happened to be the next town across.

Which transpired was actually a hostel… 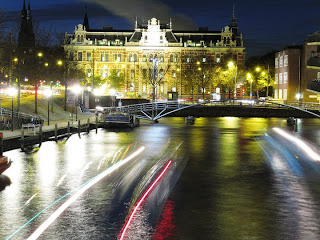 A sleepless night spent wearing my suit – for I had nothing else – and clutching the bag followed. At sunrise I decided that the following night would be spent at the airport, being skint as I was, before I cut my losses and fled the mad hostel once and for all.

By late morning I was back in the centre of Amsterdam, but this time in the sun and among the convivial crowds of Vondelpark. Wandering further into town I came across cobbled streets lined by neat rows of trees, zipping around organised blocks of cafes, shops, and patisseries. Saturdays are good days to be in the Venice of the North. So I strolled to the canal side, suited and buited (sp?) to allow myself a brief Jason Bourne moment, before setting off in search of something a little different.

You don’t come to Amsterdam to sit in Starbucks all day.

But what would Jason Bourne do? Well, for one he’d get some cheese. And so I did likewise, prowling Runstraat and Leidseplein on the hunt for a lump of Edam and a chunk of Gouda. The air of Amsterdam soon ponged with the aroma of an unwashed Irishman and his bagful of curds, pigeons fainting in my wake. It was marvellously decadent, gorging on creamy grease and indulging myself in the moody, clean-cut beauty of the tall, thin buildings that characterise the city.

And before I forget, there are bicycles too.

But back to the story... later I befriended the area known as Nieuwendijk, floating into The Blarney Stone Irish Bar to ingest some Guinness and later to be adopted by three stag-trippers from Cork. Many larks were had, including genuinely inquiring of a lady of the night if she’d be interested in playing a round of Texas hold-‘em poker. She said no.

The night wore on…

It was at 6.55am when a security guard poked me and told me that it was time to wake up. Just exactly where I was, was an utter mystery. I scratched my head and gazed around in search of a sign. Looking up all I could see was what seemed like a, well, a clog. Across the way was a man with a suitcase, and then behind him at least 400 other people with suitcases.

It was then that I remembered the vital missing ingredient to this most perplexing issue:

Rule of Travel Number 265a - if your pre-booked accommodation is utterly awful, then you can always sleep in the airport. 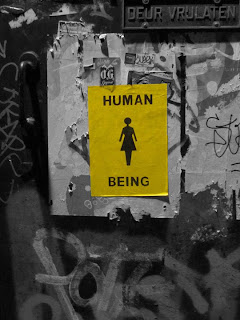